Use Energy from the Sun

Posted by David Arnold Friday, June 4, 2010 Labels: air flow and vents, fire wood, roof mounted solar collector, roof windows, solar electricity, solar hot water, sustainable forestry, window/eave relationship, wood heating
We aim to make as much use as possible of the sun energy that falls on the building each day, and to deflect unwanted heat. This reduces the amount of electricity and gas that need to be brought in from outside, which come at a financial and environmental cost.
We use the sun to generate electricity, to make hot water, and to warm the inside of the building in winter, including by growing trees for firewood.
North Windows in Main Hall

These windows were an appropriate part of the original building design. Blackout curtains will be removed and overgrown Photinia bushes have been cut back so that the windows can again function as solar collectors for winter warmth into the Hall. [The Photinia bushes are dense, attractive, hardy, soften the outside face of the wall, and the work of cutting the tops back can be repaid by a valuable animal fodder yield from the branches.] 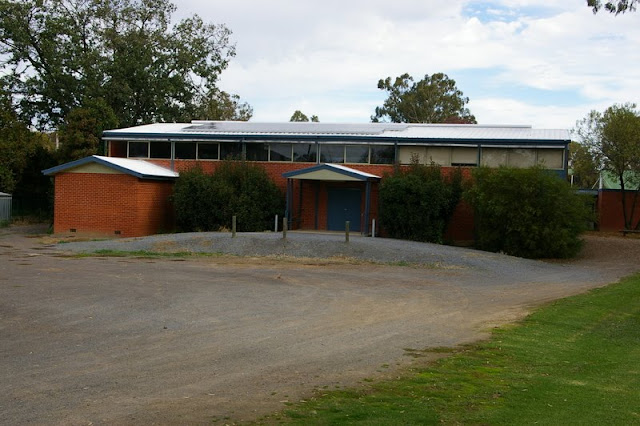 North face of Hall, May 2010. Photinia bushes growing back across the high windows, need routine trimming, ideally in Autumn, which is usually a time of feed shortage so the branch fodder can be well used. Blinds across windows at right hand end stage need to be raised when winter heat gain is desired.


The Kitchen and Supper Room had old skylights in the ceiling/roof which did not seal against draughts, were not insulated, and allowed the heat of the summer sun to come straight through into the room. Modern upgrades to these skylights were investigated, which are better sealed, insulated, and deflect summer sun to some extent. However the available options all came with disadvantages to do with lack of durability, relative expense for small benefit, complicated moving parts, and the unavoidable compromise for flat or low angle skylights between desirable light and unwanted heat gain.


We decided to replace the skylights with substantial North facing vertical roof windows. These have the advantage being designed with an appropriate eave, so that unwanted high angle summer sun is excluded while the low angle winter sun can shine directly in below the eave and warm the room. This is the 'magic' of solar design using north facing glass and appropriate window/eave relationship. The eave is matched to the height of the window to control when in Spring the sun is excluded for the Summer, and when in Autumn the sun is allowed to shine in for the Winter. 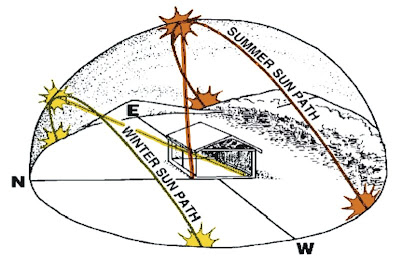 Supper room roof window, midday on 14th May, showing the low angle winter sun shining into the room below. The triangular piece of flashing at the ends is to keep out early morning sun in summer. The eave had to be larger than normal, as the building (and windows) are not oriented perfectly north, but face NNE. Morning sun in summer would have come in under a smaller eave. This was designed partly in theory, with a scale drawing, and partly also just by modelling different eave positions on-site on a summer's day.

These roof windows are excellent big skylights, giving good natural lighting to the rooms without need for additional daytime lighting. Andrew Otto Woodworks used Australian hardwood for the window frames, to avoid having to use large amounts of energy expensive aluminium – sometimes described as 'congealed electricity'. We feared that future maintenance of this public building could overlook painting the outside of these window frames, since they are out of sight from ground level, so Andrew flashed the entire outside frame with lightweight metal flashing, sealed to exclude water with silicone. 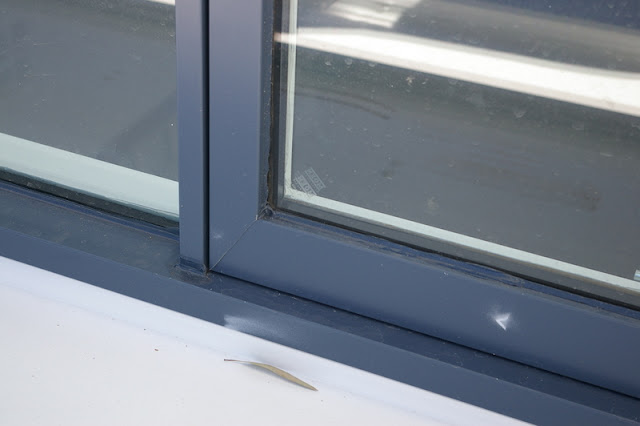 
These open-able and fly screened roof windows also serve as valuable high vents, operated by a remote switch. (Manual winding operators, through installed cables, could have been a good option if they were more easily available)


Overall the construction of the roof windows was more expensive than simply upgrading the skylights to modern energy efficient ones, but the big roof windows have so many additional benefits that they give much more value for money. Their construction did depend on having access to an experienced and adaptable carpenter such as Trevor Northey, who was willing to solve problems and custom build. And the flat roof/ceiling framework was reasonably easily adapted to carry the roof window frames, with existing steel beams there to carry it. 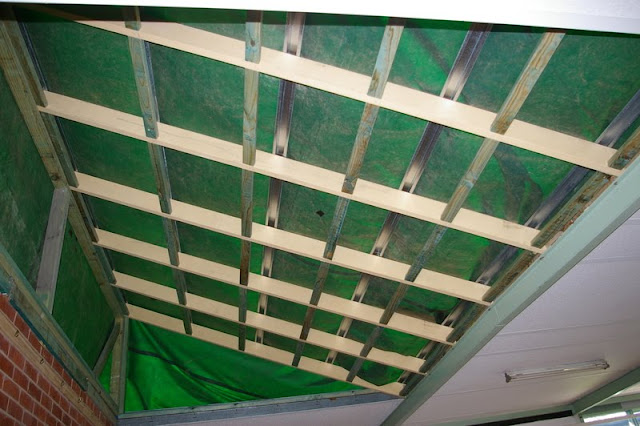 Supper room roof window framing, showing the existing steel frame (painted light green) that was available to carry the newly framed roof. This new framing is no heavier than the roof tht it replaced, and the new heavy double glazed windows are carried by the wall at left.

How is wood heating related to using energy from the sun? Because plants are our fundamental solar converters. The sun is the main driver of planetary life systems. It is the energy source that powers weather, including rain, and plant growth.

So we can think of fuel wood as embodied solar energy, provided
In 1996 we planted the Violet Town Community Forest on unused land at Shadforth Reserve in Shiffner St. This is designed to integrate sustainable forestry with amenity/ recreation use and biodiversity values. The high value forestry products will be long term sawlogs and durable poles for building. As the forest develops it can benefit from thinning and management, with a continual yield of fire wood. 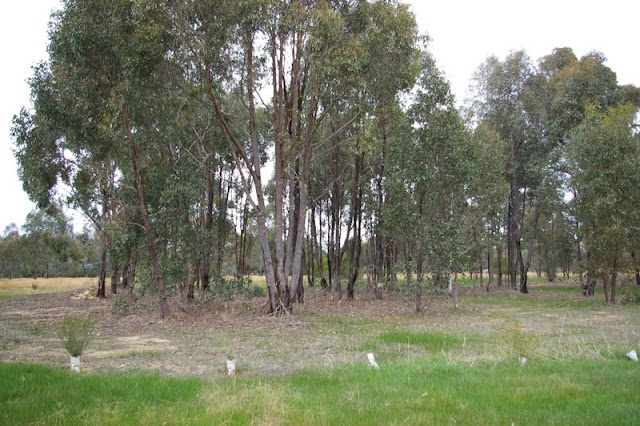 This stand of naturally regenerated Grey Box at the Community Forest is approximately 20 years old. It already has construction quality poles available, which could be 'pruned' from multi-stemmed trees as in the foreground. 'Thinning' – removal/harvesting of some trees – from the dense parts of the stand would allow selected trees to grow on, and fast track the evolution to a mixed age, multi-level and biodiverse stand with more of the qualities of an old growth forest or woodland. 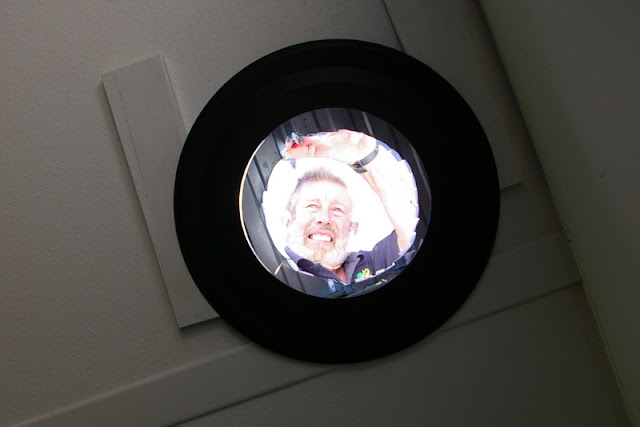 Ken Whyte, plumber, installing the flue for the wood heater at the Community House. Dec 2009 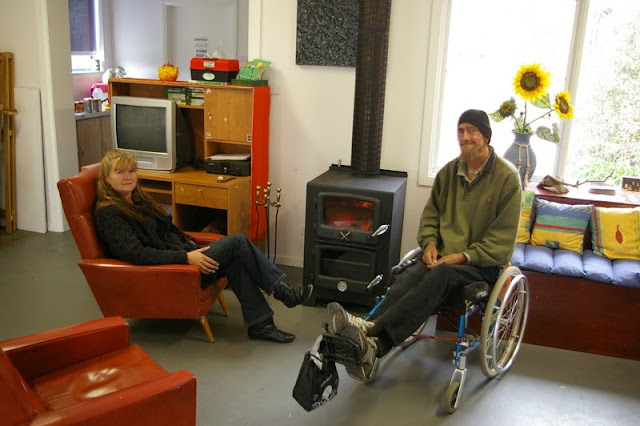 Jan Howe and Pete enjoying the new wood heater at the Community House. May 2010. This room had no other heating, and only small solar gain through its mostly shaded north window, and west window at back left where the heat reflective blind would more usefully be up in winter. A Nectre 'Baker's Oven' was chosen to make better use of the heat for a cooktop, and for baking, in Community House programs.


In the Meeting Room, and Day Care room at the Early Childhood Centre, we installed 'Sola-Mate' solar collectors, for warmth and cooling. These are another option for spaces that cannot catch the sun's warmth through north facing windows. An electronic controller directs a small electric fan to blow warm air into the room from a roof mounted solar panel, when needed to warm the room. 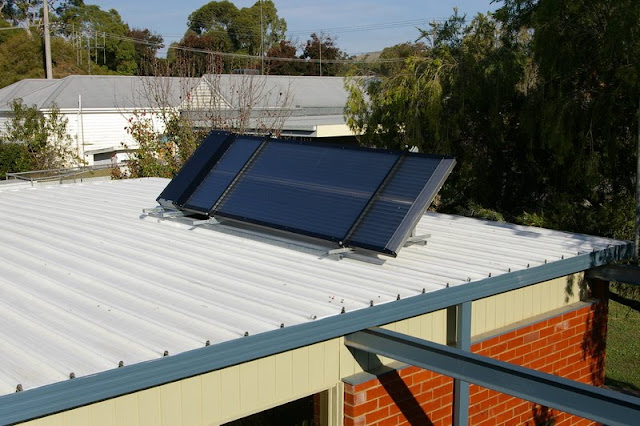 Sola-mate panel above meeting room, May 2010.


The solar panel also sheds heat to the night sky much more quickly than the interior of the room can, so on hot summer nights the controller can direct the fan to blow cooler air from the panel into the room.

The incoming air is fresh, and is pushed though a filter [changed every 12 – 18 months] which removes pollen and dust.


The Community Complex building uses very little hot water, mainly for occasional kitchen use. It was appropriate to keep the existing and fairly new instantaneous gas hot water service for this occasional use. Instantaneous units only use energy when hot water is used, which is efficient for this situation.

However there was a 40m hot water pipe to the hand basins in the Men's toilets, and a 20m pipe run to the Women's toilet handbasin. This was very inefficient. People washing their hands would turn on the hot tap, wash their hands, and turn it off again long before any hot water would reach their basin through the long pipe run. Hot water would be left in the pipe to cool before the next person washed their hands, and the energy used to heat that water was wasted. So we simply disconnected the hot taps in these toilets.
The Early Childhood Centre had an electric storage hot water service. This consumed about 8kWhrs/day when hot water was used, and still consumed about 6kWhrs/ day when no water was used! This is apparently fairly standard for electric hot water units, so we replaced this with a gas boosted solar unit. We chose evacuated tube solar collectors for their greater efficiency in winter – it is easy for solar collectors to make hot water in summer, even normal garden hose can do it. And again, the instantaneous gas booster only uses gas when hot water is used.
Three types of manufactured solar collectors on the WNW facing Early Childhood Centre roof. Evacuated tubes for solar hot water in foreground, photovoltaic panels for electricity at right rear, and at the left rear, slightly shaded in the late afternoon, is the sola-mate panel for heating and cooling.

In early March 2010 Clear Solar put 4.86kW of solar panels on the Main Hall roof, and another 4.86kW on the Early Childhood Centre [ECC] roof. A west facing area of the ECC was the least shaded space, so these panels were put on frames. 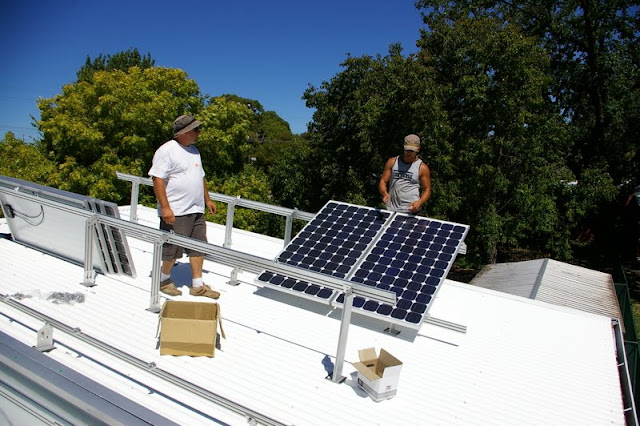 Matt and David from Clear Solar installing the panels on frames on the west facing Early Childhood Centre roof.

The inverters were installed in May 2010. The installation does not have battery storage, but is grid interactive. When the sun shines power is supplied to the grid, and recorded as credit on the meter. When the building uses power it takes power from the grid. A 'bi-directional' (two way) meter will be installed that records how much power flows in either direction. If the building produces more power than it uses, then the power company pays money to the account holder (Shire of Strathbogie). At the very least these panels will reduce the amount of the power bill.


The grid interactive installation is efficient because it makes use of and supports the existing grid network instead of having to install an (energy and financially) expensive array of batteries, maintain these, and replace them every seven years or so.
David Arnold

hi. just dropped by to say how much i appreciate you taking time to share such wonderful posts.

There is a chance you qualify for a new solar program.
Find out if you're eligble now!

What is the Violet Town Eco Living Project?

The energy efficiency retrofit of two Violet Town community buildings – a 1970's built community complex (former Shire offices), and a similar aged Early Childhood Centre, recently extended. And an education program to engage locals and visitors with the strategies used in this retrofit, and with broader principles of ecological living.
Project by Violet Town Action Group, in co-operation with the Shire of Strathbogie, supported by an EcoLiving Grant from the Victorian Government Sustainability Fund.

Redesigning a home in Seymour